In the mid-to-late 1800s, chlorine had been used sporadically to help control infection in hospitals and drinking water. Common water treatment did not start in the U.S. until the early twentieth century when increasing cases of waterborne illnesses prompted many large cities to begin large scale filtration of water supplies. However, filtration alone was inadequate to reduce widespread illnesses and in 1914 a standard was enacted that limited drinking water to a maximum of 2 coliforms per 100 ml, ushering in the modern age of disinfection in the U.S. Chlorination virtually eliminated waterborne epidemics, increasing life expectancy by 50%.

Today, there are a number of effective technologies available for the disinfection of water and wastewater, and each has its advantages and disadvantages. Understanding the treatment process goals is fundamental to choosing the right disinfection option. Tom Muilenberg tells us more. 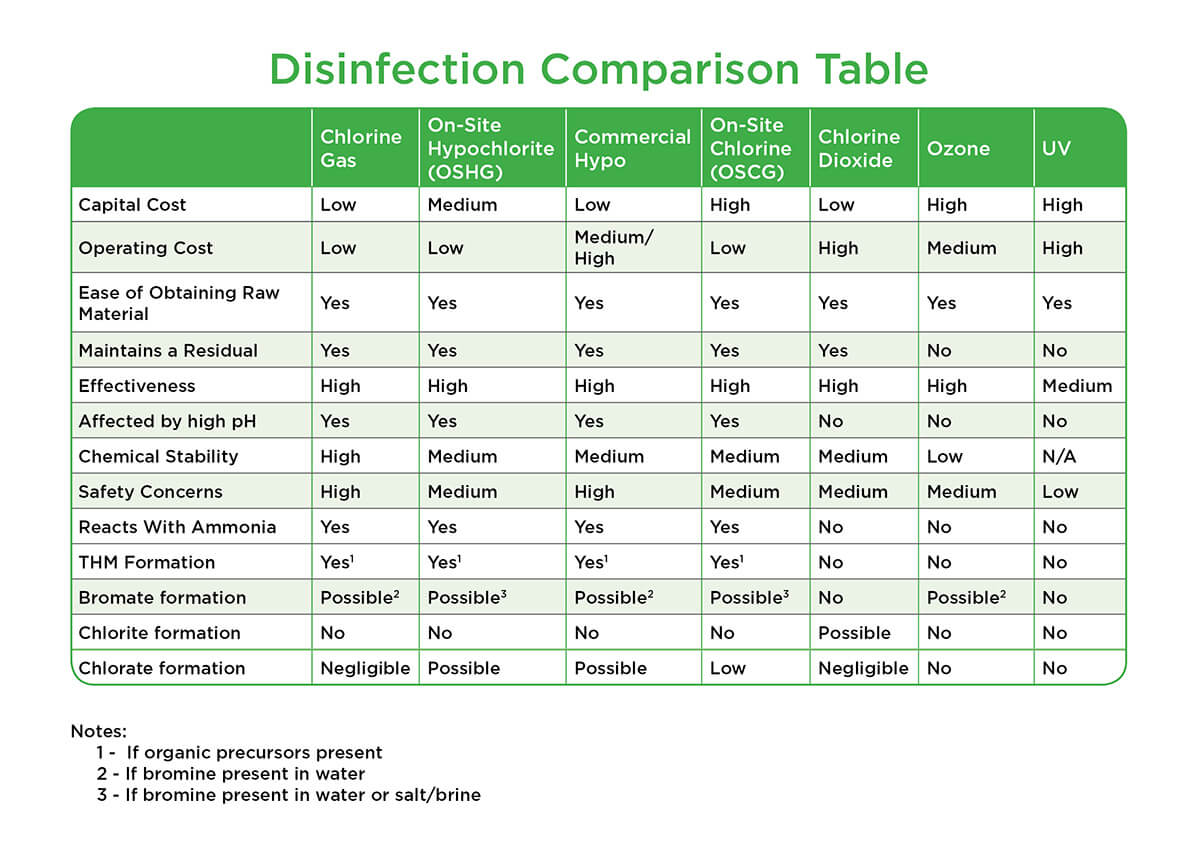 Used in water treatment plants since the early 1900s, it is essentially pure chlorine, typically delivered in pressurized 150-pound cylinders, one-ton containers or rail cars directly to the site in a usable form.  It is generally the most cost effective, efficient, and easiest to maintain method of disinfecting with chlorine.  Vacuum-operated solution feed systems enhance the safety of feeding chlorine gas.  Control modes typically used are flow proportioning, residual control or compound loop (flow plus residual).

Manufactured at approximately 12.5 to 15% chlorine by weight with a pH greater than 11. Delivery systems of this liquid disinfection include the storage tank, chemical dosing pumping system with associated valves and piping, and a control method such as flow control, residual control or compound loop (flow + residual).  Classified as a hazardous chemical, bulk sodium hypochlorite requires secondary containment and hazardous chemical manifests. Although more expensive per pound of chlorine than chlorine gas or on-site hypochlorite generation, it is considered simpler to maintain and operate. Bulk sodium hypochlorite concentration decays over time and higher volumes are required to achieve the same result. Chlorate as a byproduct is a concern for the expected new MCL of 210 ppb.

An OSHG system uses electrolysis to generate a nominal 0.8 % solution of hypochlorite on-site as needed.  A dilute brine solution passes through an electrolytic cell, converting the chloride ion from the salt to hypochlorite. The process typically uses 3 pounds of salt, 2 kW hours of electricity and 15 gallons of water to produce a pound of chlorine in 15 gallons of solution, the equivalent of the active chlorine present in 1 gallon of 12.5% bulk hypochlorite, or 1 pound of chlorine gas. OSHG systems have moderate maintenance requirements, producing chlorine at about 25% - 60% of the cost of bulk sodium hypochlorite per pound of chlorine produced and is considered safer than transporting gas under pressure.

Similar to OSHG, an OSCG system uses brine solution and membrane electrolysis to produce higher concentrations of hypochlorite up to 12.% of chlorine gas which is vacuum-educted to the point of application. On-site chlorine generation reduces transportation and delivery hazards associated with shipping commercial hypochlorite, and eliminates transportation safety concerns of chlorine gas delivered in liquid (bulk) containers.

In the presence of ammonia, chlorine combines with the ammonia to form either mono-chloramine, di-chloramine or tri-chloramine depending on the ammonia-to-chlorine ratio.  Mono-chloramine is a relatively weak disinfectant but maintains a very stable long-lasting residual in water and is therefore often used as a secondary disinfection method in systems with a long water age.  Chloramine systems can be challenging to control and operators must carefully monitor and maintain their dosing systems for maximum accuracy.

Chlorine dioxide is generated by mixing acid or chlorine gas and sodium chlorite then mixed with ejector water as an entrained gas to form a solution that is applied to the process.  Because it cannot be compressed and liquefied for transportation, it is generated on site close to its intended use.  It is a strong oxidant and disinfectant across a wide pH range for both water and wastewater and does not react with ammonia to become a weaker disinfectant, important for plants where the water has a high ammonia content, often resulting in lower operating costs. Chlorine dioxide is frequently used in water treatment plants as a primary disinfectant early in the treatment process to prevent the formation of THMs.

Comprised of three oxygen atoms (O3), ozone is a very strong oxidant.  It deteriorates rapidly to oxygen and is usually generated on site using either air or pure oxygen. Ozone does not produce disinfection byproducts (DBPs) and can be used as a primary disinfectant for water treatment to reduce THMs and DBPs.  Ozone also is used for taste, odor and color control in potable water treatment, as well as Fe/Mn removal when THMs are a concern.  Ozone can also be used to remove micropollutants including pesticides at disinfection dosages. Ozonation is typically not used for primary disinfection of wastewater effluent with high levels of suspended solids (SS), biochemical oxygen demand (BOD), chemical oxygen demand, or total organic carbon since the cost of treatment can be relatively high in capital and in power intensiveness.

Ultraviolet light energy at 254 nm wavelength is absorbed by the DNA of a microorganism, stopping the reproductive process and rendering it non-infective and microbiologically dead.  UV systems operate at varying pressure and output, depending on application, target pathogen and water quality involved.

UV has most recently been used to treat wastewater effluent since regulations require more stringent chlorine discharge limits for various receiving streams. UV is effective in removing chlorine-resistant pathogens from drinking water including Cryptosporidium, Giardia and various viruses that have proven to be resistant to traditional disinfection methods such as chlorine and filtration.

Peracetic acid (CH3CO3H - also known as peroxyacetic acid, or PAA) is a liquid that functions as a strong oxidizing agent, has an acrid odor and can also be used as a disinfectant. PAA is generally commercially available as an equilibrium mixture of 12-15% peracetic acid and 18-23 % hydrogen peroxide.  PAA is available in 330-gallon totes and in bulk, requires stainless steel piping, and is administered using a metering pump.

Since PAA is a highly effective bactericide, does not form DBPs, has minimal dependency on pH and does not leave a residual, it has received significant consideration for the disinfection of wastewater effluent.

With increasing pollution and resulting regulations, it is becoming increasingly difficult to achieve all of the requirements for safe disinfection with one treatment alone.  Today, a more layered approach for disinfection with multiple technologies used together is often necessary.  For example, a surface water potable water treatment facility may use chlorine dioxide at the head of the plant to gain disinfection credit without creating chlorine byproducts, then apply chlorine to the finished water to maintain a residual through the distribution system.

With a well-defined treatment process goal and experienced, knowledgeable partners working together, developing the most effective, simple and budget-conscious disinfection plan can be a painless process.

Register for our newsletter here Contact us for more information here