Chlorate was added to the Third Chemical Contaminant List (CCL3) in 2010, indicating that the Environmental Protection Agency (EPA) is reviewing chlorate as a potential candidate for regulation under the Safe Drinking  Water Act. In 2014, chlorate was evaluated as a candidate for regulation under the Regulatory Determinations 3 (RD3) program, which indicates the EPA’s growing attention to chlorate. While there is no indication that chlorate is a potential carcinogen to humans, negative health impacts such as thyroid issues, reduced hemoglobin production, and reduced weight gain have been observed in laboratory animals subjected to prolonged exposure to chlorate.

Chlorate is a highly oxidized form of chlorine that can be introduced to a water source as an industrial or agricultural contaminant or into a finished water as a disinfection byproduct (DBP). As a DBP, chlorate can result from water disinfection with bulk sodium hypochlorite, chlorine dioxide, or hypochlorite formed through electrochlorination (EC) systems. 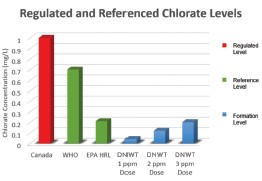 Currently, chlorate in drinking water is not regulated in the United States and there is no enforceable Maximum Contaminant Limit (MCL). In Canada, chlorate is regulated at concentration of 1.0 mg/L (1000 µg/L).  The World Health Organization (WHO) recommends

a chlorate limit of 0.7 mg/L (700 µg/L). While no final recommendation has been promulgated, literature on the topic indicates that the regulation may fall within the range of 0.21 mg/L (210 µg/L) to 0.8 mg/L (800 µg/L) in the US.  While the EPA has established 210 µg/L as a health reference level (HRL), it is conjectured that the EPA will not set regulation at such a low level as it will seriously impact the viability of using delivered bulk hypochlorite for disinfection.

Several studies have been conducted by researchers regarding the occurrences of chlorate in drinking water and the factors that influence chlorate introduction. With regard to delivered hypochlorite, chlorate mainly arises as a degradation product of hypochlorite ions. Hypochlorite degradation is exacerbated by several factors, including:

Because of these factors, some water treatment plants will struggle with using bulk hypochlorite depending on how fresh they can purchase the product from chemical manufacturers and how quickly they can use the solution. If chlorate is regulated as a DBP, most utilities that use bulk hypochlorite will have to significantly alter their use of this chemical to avoid exceeding the regulatory limits, and these changes will result in a substantial increase in operational costs.

Operational changes may include:

Any of these operational adaptations can be expected to create significant hardship for water treatment plant operators since they would involve increased logistical complexities as well as higher operating costs. These impacts would be felt the most for the lowest chlorate MCLs that are being contemplated. 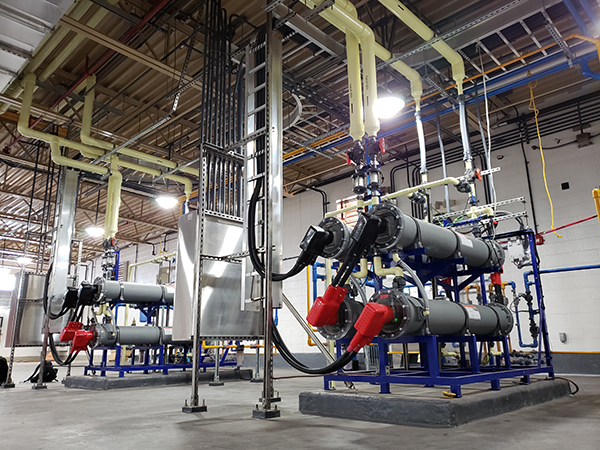 On-site generation uses basic, simple chemicals to generate oxidant at the point of use and is often used for safety, environmental and cost benefits. In this case, the hypochlorite is generated using salt. Softened water is mixed with salt in a brine tank to form saturated brine. The saturated brine enters the electrolytic cell, an electrical current is passed through the electrolytic cell, and the oxidant is produced:

Hydrogen gas produced during the electrolysis process is vented outside and the oxidant solution leaves the electrolytic cell and is stored in an oxidant tank. The oxidant solution is dosed into the treatment process by a metering pump. The on-site generator is turned on and off from a signal located inside the oxidant tank. During this electrochemical process, chlorate ions are produced as an undesirable side reaction. In the process, a portion of the hypochlorous acid or hypochlorite ions are oxidized at the anode to produce chlorate ions. 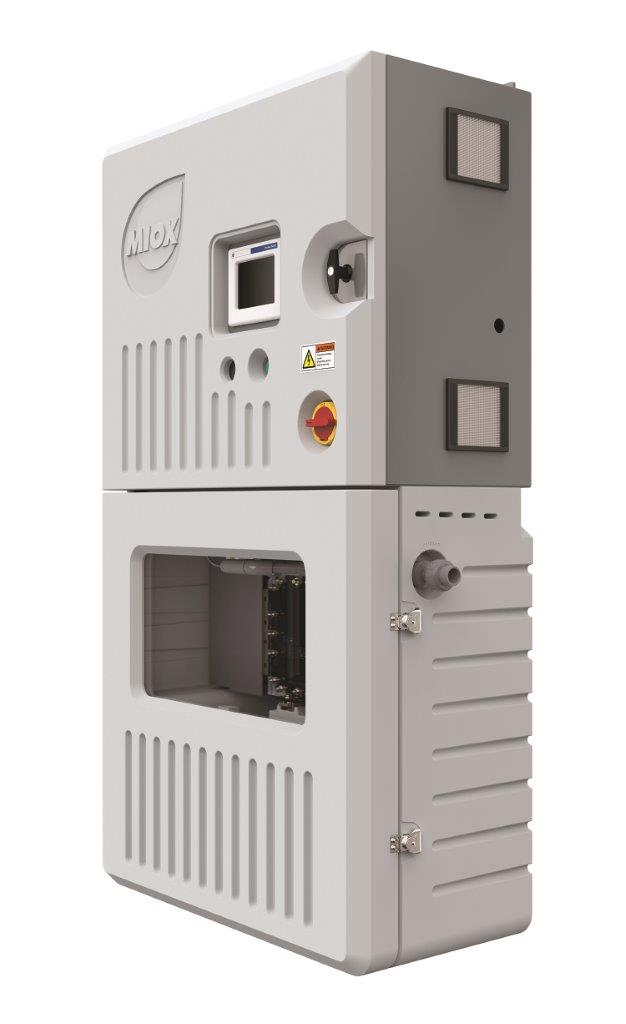 With nearly a century of electrolysis expertise, De Nora intimately understands many of the factors involved in the production of chlorate during sodium chloride brine electrolysis, including storage time, storage temperature, and hypochlorite concentration. De Nora has developed technology to control and influence these factors.

Chlorate formation from hypochlorite solutions generated by De Nora electrolysis is well below proposed regulatory levels. Chlorate is expected to be regulated by the EPA, likely at or near the international WHO guideline of 0.7 mg/L (700 µg/L). Extensive testing on the chlorate production by De Nora EC systems has been undertaken both internally and in conjunction with third party studies. Typically, the De Nora systems produce chlorate at a rate of less than 40 micrograms (0.04 mg) per milligram of free available chlorine (FAC).

Therefore, even at a high FAC dose of 5 mg/L, the expected chlorate concentration in the treated water will be less than 200 µg/L (0.2 mg/L), well below the likely 700 µg/L limit and is even below the EPA health reference limit of 210 µg/L. Typically, water treatment plants only dose 2 - 3 mg/L as free available chlorine, and at these dose points, chlorate content in the finished water will likely be half of the lowest contem-plated chlorate regulatory limit.
Since the hypochlorite solution is generated on-site, as needed, storage time is typically 24 hours or less, minimizing hypochlorite degradation.

The hypochlorite solution is generated at less than 1%chlorine concentration, which also reduces the chorine degradation rate.

Now, De Nora – including MIOX, which they acquired in early 2019 - have been working independently for several years to better understand how chlorate is produced during electrolysis. De Nora is actively conducting research at multiple laboratories to understand the mechanisms resulting in the production of chlorate during electrolysis to ensure their products will be able to meet future chlorate regulatory requirements. Several new patented technologies are expected to result from these research efforts, ensuring that De Nora Electrochlorination systems will be able to meet even the strictest chlorate limitations as regulations continue to evolve.

While it’s impossible to know exactly if, when, and how low EPA might regulate the production of chlorates in drinking water, a company committed to electrolysis for more than 95 years is certain to be at the forefront of new technologies to meet and exceed these future regulations.

This site uses cookies to improve the user experience. If you need more information or want to change settings, click here